Rabat – Morocco is one of the most peaceful countries in the Arab world, according to the Global Peace Index 2017 recently published by the international think tank Economics & Peace.

Ranked 75th on a total of 163 countries with a 2.004 score, Morocco has gained 15 places since 2016 and currently occupies the sixth position in the MENA region. 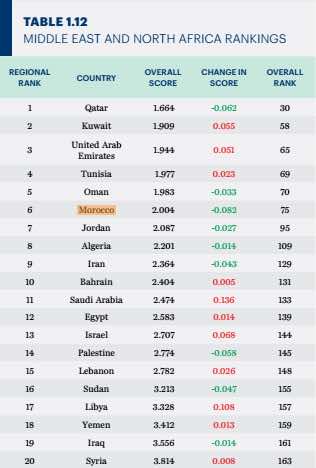 “Morocco continues to benefit from a broader degree of political and social stability than most of its neighbours in North Africa, and recorded the highest improvement, driven by lower levels of militarisation,” said the think tank.

The report also ranks Morocco fourth amid the five countries showing significant improvements in the militarization domain, with a 0.192 score change, pitching the Kingdom 27 places ahead compared to 2016. 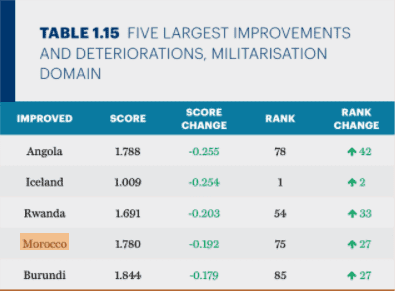 However, the reports states that the economic cost of violence in Morocco is estimated at MAD 18.885 billion, which is equivalent to 6.6 percent of the Kingdom’s GDP.

According to the report, “the greatest regional deterioration of this index occurred in North America, followed by sub-Saharan Africa, the Middle East and North Africa (Mena).”

The GPI ranks Tunisia and Algeria respectively 69th and 109th, with an “average” level of peace.

In the MENA region, Qatar comes in first position with the 30th place at the world level, followed by Kuwait (58th), United Arab Emirates (65th), Tunisia, Oman (70th) and Morocco. Algeria is in the 8th position, while Syria ranks last worldwide.

However, the Middle East and North Africa are one of the lowest-ranked regions in the GPI. The report explains the deterioration of the overall score of the region in 2017 due to “the intense rivalry between Shia Iran and the Sunni Arab Gulf monarchies, with Saudi Arabia at the forefront.”

This vicious enmity has played a nefarious role in the civil war in Syria, notes the report, and has been a key factor in Saudi Arabia’s “costly military intervention in Yemen, where it has been fighting to oust the Iranian-backed Houthis.”