David West Reynolds has visited a galaxy far, far away and wants to share it with you.

That galaxy is the Sahara Desert of Tunisia, where he was the first to find the original — supposedly lost — Star Wars filming locations using a combination of his fanboy status and archaeological talents.

Not only that, he filmed it all and is making a documentary of his trip, where he takes audiences to iconic Star Wars settings like Luke Skywalker’s underground dining room and the Jundland Wastes, where Jedi Knight Ben Kenobi rescued Skywalker in a canyon.

The expedition meant a lot to the Indiana man. His quest started in 1995 and actually spiraled into a 10-year career working in the Star Wars industry: He helped scout locations for a Star Wars prequel, spurred a Star Wars tourism industry in Tunisia and has written a number of New York Times bestselling Star Wars reference books. He even took a job for a while at Skywalker Ranch.

But it all started back in that original Saharan trip.

Now Reynolds wants to cap off that journey by finishing post-production of the film, called “Journey to Tataouine.” He started a Kickstarter campaign to help.

“I’m amazed at the support,” Reynolds said. “The fans put us over the top for our first goal in just six days.”

But just how did he find these locations? 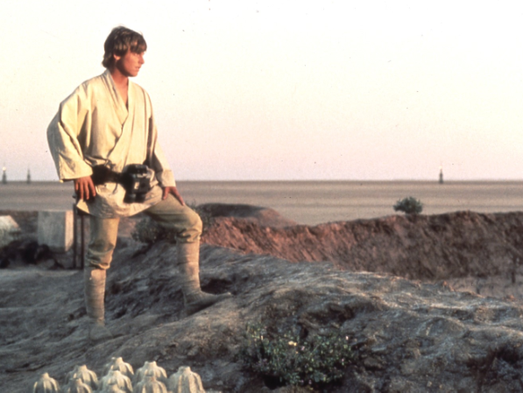 When Reynolds called Lucasfilm, the production company founded by “Star Wars” creator George Lucas, no one could tell him the locations because there simply wasn’t a record of them. But the Lucasfilm team connected him with Robert Watts, the location scout for the original movies.

“I went to Tunisia with clues like, ‘It’s on the left,'” said Reynolds about Watts’ hazy descriptions.

He used photographs from the movie and looked at rock formations in the background to narrow down possible locations, a critical part of any archaeological expedition.

“I saw there are sedimentary rocks at a particular angle, and I looked at a geological map in the university library, and I cut it down to only four places where there’s that sedimentary rock,” explained Reynolds, who received his doctorate in archaeology from the University of Michigan.

After narrowing down locations, the locals helped them pinpoint the exact ones in a month-long excursion across the Sahara.

Here’s what they found 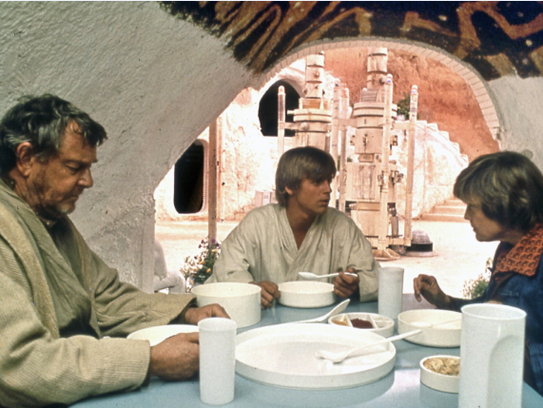 Luke Skywalker with his family in their underground dining room. This scene was filmed at the Hotel Sidi Driss in Matmata, a small town in Southern Tunisia. The hotel was the only known shooting location when when David West Reynolds and Michael J. Ryan set out. (Photo: Star Wars ©1977 Lucasfim Ltd.)

The Hotel Sidi Driss in Matmata, a small town in southern Tunisia, was the only exact location Watts remembered when Reynolds started his “treasure hunt” of an expedition. The site served as the Lars homestead and underground portion of Luke Skywalker’s home. It still had the decor from the movie.

Reynolds also found the site used for the spaceport of Mos Eisley, where Hans Solo’s spaceship is docked and the cantina where audiences meet Hans Solo. Reynolds said it was shot on an island called Djerba off the coast of Tunisia where the buildings had a style of arch not seen elsewhere.

“It was otherworldly,” Reynolds said.

In about a month of working sunrise to sunset, they also found locations used for the Jundland Wastes, the surface portion of Luke Skywalker’s home located in salt flats in southern Tunisia and the site of the Sahara dunes where robots C3-PO and R2D2 crash land.

How it turned into a lifelong obsession

After his expedition, Reynolds wrote an article for Lucasfilm’s fan club magazine Star Wars Insider about his trip. At the same time, the company was getting ready to film the prequel to Star Wars — you can guess who they called to serve as their guide in revisiting the locations.

Reynolds ended up taking a job at Skywalker Ranch with Lucasfilm in Marin County, California, where he ran the Star Wars website for a few years and wrote the New York Times bestselling Star Wars reference manuals.

In 2000, he started his own consulting firm, working in communications for government clients and other international organizations. While working, he put his trip footage on the back burner because Lucasfilms didn’t want to release it, he said.

But when the 2011 collectors set of the Star Wars movies was released on Blu-ray, one of the movie’s producers talked about working with Reynolds and urged him to dust off the footage. 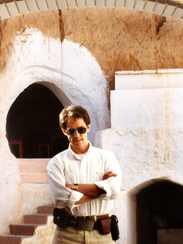 David West Reynolds in front of the Hotel Sidi Driss in Matmata, the only “Star Wars” shooting location he knew when he set out in Tunisia. Reynolds said the set decorations like the ceiling mural an the doorway frame are still in place as the crew left them. (Photo: Michael J. Ryan, Phaeton Group)

“I thought there’s a lot of really fun stuff here,” Reynolds said. “It’s been years since I wrote the first article (for Star Wars Insider), and after all, I created this sub-industry of Tunisian tourism.”

It’s true: Hundreds of thousands of people have visited the sites since Reynolds’ article. And after the 2011 Arab Spring revolutions, Tunisians are looking to revitalize those locations to boost their economy, according to NBC News.

But no one has seen the locations like Reynolds. And starting last July, he set out with Ray Cart, a colleague in Southern Indiana, to make his documentary, which he hopes to finish before winter.

By Madeleine Winer, The (Louisville) Courier-Journal

It’s official, the first Tunisian Satellite will be finally launched on November 15, 2020